Investing in the Future
of Your Libraries

Investing in the Future
of Your Libraries 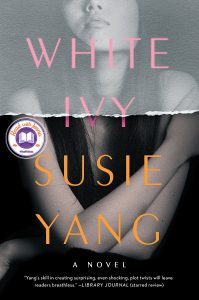 Join us for a Between the Lines Author Talk with White Ivy’s Susie Yang on Monday, February 8 at 7:00 – 8:00 pm! Susie Yang will be interviewed on her writing, influences, and the themes within the book, with an audience Q&A to follow.  Register for the author talk here!

White Ivy twists the classic American Dream story. Following Ivy Lin as she’s raised by her immigrant grandmother who teaches her how to “become” a typical teenager by stealing. Drawing the attention of Gideon Speyer brings punishment and Ivy is sent to China. Returning years later, she has an even stronger wish to attain her own privileged American Dream. No matter who she’ll have to sink her claws into to achieve it.

“The genius of White Ivy is that each plot point of the romance is fulfilled but also undercut by a traumatic pratfall, described in
language as bright and scarring as a wound.” — Los Angeles Times

Susie Yang was born in China and came to the United States as a child. After receiving her doctorate of pharmacy from Rutgers University, she launched a tech startup in San Francisco. She has lived across the United States, Europe, and Asia, and now resides in the UK. WHITE IVY is her first novel. WHITE IVY was just optioned by Netflix for Shonda Rhimes to Executive Produce through her company Shondaland. The project will be developed as a limited series.

We support 11 communities and unincorporated San Mateo County. Learn more.
Donations to libraries not part of this list should be made through those libraries' dedicated fundraising organizations.